Hello interweb, Nate here.  Sorry that this did not go up Monday but I guess I needed more time to finish this list than expected and thus I started making this later than I should’ve.  Now I am officially out of school for the summer and since this is my first post for summer of 2015 I figured I should start out with a bang!  So, how about I do my favorite X-Men?  If you’ve been reading this blog for any amount of time, you would know that I absolutely love the X-Men.  I love the X-Men more then the Justice League, Avengers, or even the Teen Titans.  Now if you’ve read my Top 10 Favorite Superheroes list than you already know the top 4 already, however what about the other 6? Plus if you haven’t read that post yet than you probably don’t know my top 4.  Either way, here they are!

To see my other Top 10s (or 5s) click here. END_OF_DOCUMENT_TOKEN_TO_BE_REPLACED 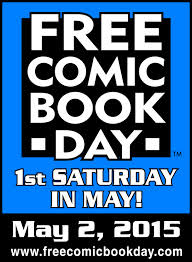 Hello interweb, Nate here.  So Saturday was Free Comic Book Day!  For those of you who don’t know, FCBD is the first Saturday of every May where comic book publishers selects a few of their comics and gives them out for free.  This was actually my first time going to a FCBD event so I didn’t really know what to expect.  I originally was planning on getting more titles than I got (such as Teenage Mutant Ninja Turtles, Avatar, and Pokemon) but it turned out that you where only allowed to get three comics unless you where cosplaying (dressing up as a fictional character, usually from comics or anime/manga) where you could take four.  So the comics I ended up getting was: Divergence #1 from DC, and Secret Wars #0 and All-New All-Different Avengers both from Marvel.  Since I liked all the comics I got, I decided that I wanted to give them a review.  However, because I got 3 comics that I want to review I’m not going to do my usual comic review format just to make it a little quicker.  Also, I’m just going to talk about the stories, so don’t be surprise if I don’t mention the art or anything like that.  So with that in mind, what did I think about these comics? END_OF_DOCUMENT_TOKEN_TO_BE_REPLACED