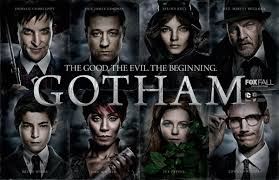 Hello interweb, Nate here.  Sorry for not posting on Saturday, but as many of you know the TV show Gotham debuted last week and  decided to review the first five episodes just like how I’m reviewing the first 5 issues of the current Teen Titans comics.  Now this will be a spoiler review but that’s why I’m doing the episode that aired last week as that gives you guys a week before hearing my thoughts giving you plenty of time to watch the series.  The shows on Fox (for me it’s channel 12) and is every Monday night at 8.  So with that said, let’s review this thing.

Characters Introduced in This Episode

James “Jim” Gordan: The main protagonist of the series, Gordan is a detective at Gotham City Police Department who is out to find the man who murdered Bruce Wayne’s parents and to get rid of the corruption of Gotham.

Harvey Bullock: Bullock is Gordan’s partner who seems to be corrupt as well.

Bruce Wayne: The son to billionaires: Thomas and Martha Wayne, he witnessed the murder of his parents and is now under the care of the butler Alfred Pennyworth.

Fish Mooney: a mob boss who is secretly associated with Harvey Bullock

Gotham had quite a few cameos from younger versions of Batman’s villains.  Some of them includes:

Selina Kyle (Catwoman): A young thief (I’m guessing 10-ish) with a interest in cats who witnessed the murder of Bruce Wayne’s parents.

Edward Nygma (Riddler): A member of the Gotham City Police Department who is good with riddles.  If you aren’t a Batman fan, you might have missed this cameo.

Ivy Pepper (Poison Ivy): In the comics her actual name is Pamela Ivy, she is shown being a young girl (around the age of Selina Kyle) with an interest in plants.

The episode focuses around James Gordan and Harvey Bullock as they attempt to find the murderer of the Waynes.  In the first part of the episode, Bullock and Gordan constantly argue as Bullock wants Gordan off the team as he’s too “nice”.  While Gordan refuses to leave, they gain evidence towards the murder and gets closer to solving it.  After being introduced to Fish Mooney, a crime boss in which seems to play a bigger role in this story.   They are then introduced to Oswald Cobblepot, a new member to her gang who is mockingly called “Penguin”.

However, latter evidence shows that Mario was framed and Gordan remembers Bruce Wayne telling him that the murderer had shiny shoes.  Gordan goes back to the Peppers and sees no such shoes.  Later, we see Fish Mooney telling Penguin that she believes he betrayed her.  The episode ends with Bullock making Gordan shoot Penguin in the head and throwing him into the ocean.  Bullock instead shoot by his head (purposely missing) and pushing Penguin into the ocean allowing him to escape.

This was a great start to the series as it introduced James Gordan and Harvey Bullock perfectly and I really like how this series seems to be based around them solving the murder of Batman’s parents.  I also really liked the villain cameos as they where really cool nudges to Batman fans and I had fun spotting them.

What I think will be really cool is if they showed some more things with Batman’s villains before they became villains.  I would really like to see them show what these guys was like before Batman was around and what their life was like.

Well that wrapped up this review.  How did you guys like the first episode?  Leave a comment below.  Peace XD