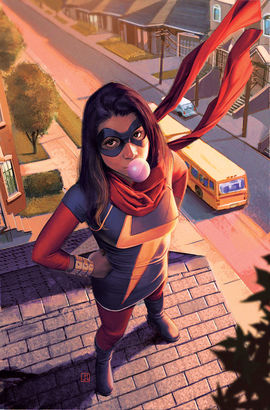 Hello interweb, Nate here.  So I meant to do this Character Bio along side the one I had for Miles Morales/Spider-man a little bit ago but these Character Bios are actually some of the longest posts it takes for me to write since it takes more research than a simple review and requires more details than simply gathering a bunch of facts about a character.  With that said, I absolutely love this character and really wanted a bio out of her for your entertainment and possibly have you guys fall in love with this character if you haven’t already.

Powers and Abilities: Kamala’s main ability is shape shifting which allows her to stretch her limbs, grow or shrink in size (which she dubs “embiggening” or “disembiggening”), or change her appearance to look like anyone or anything.  She also a healing factor that can heal minor wounds rather quickly or major wounds such as a bullet to the stomach.  Kama’s also an Inhuman which means that she has the standard Inhuman abilities such as enhanced strength or speed and a resistance to cold or heat.

Equipment: Kamala wears a special costume modified by her best friend, Bruno, to compliment her shape-shifting abilities by stretching or shrinking with her.

Weaknesses: In order to heal from series injuries, Kamala’s body temporarily looses it’s shape shifting abilities and she becomes rather hungry while healing.  Electrical shocks can also cause her cells to loose their elastic properties for a temporary amount of time.

The idea for Kamala Khan came from a conversation between Marvel editors Sana Amanat and Stephen Wacker where Amanat was telling Wacker stories about growing up as a Muslim-American.  Wacker found her stories interesting and they ultimately decided that they wanted to have a Muslim superhero and tell an authentic story about what it is like to be Muslim in America.  They ultimately took this concept to G. Willow Wilson, an established comic book writer who previously wrote for DC Comic’s Vixen character and identifies as Muslim.  Wilson loved the idea and was eager to help create Kamala and took it upon herself to write the the comics for the character.

When creating the character herself, Marvel wanted for the character to be relatable and accurately show the life of a Muslim-American teenage girl and thus strayed away from anything sexual in design like many female superheroes tend to follow.  They also wanted the costume to pay homage to the cultural identity connected with Kamala without wearing a hijab.  While Amanat and Wacker thought up the concept for the character, G Willow Wilson’s contribution to the comic shaped Kamala’s character the most with help from Adrian Alphona who provided the art for Kamala’s earlier comics.

Kamala Khan grew up in Jersey City and was raised by her Pakistani family in a conservative Muslim home.  Because her parents came to America from Pakistan, they had Kamala honor their family heritage through strict rules and regulations.  While growing up, Kamala became interested in nerdy subject and became a huge Avengers fangirl, even writing Avengers fanfic that she would post online.  Despite her family’s strict rules, she was able to maintain friends with Bruno who’s not a Muslim or Pakistani but was still able to become Kamala’s best friend.

One day Kamala would sneak off to a party behind her parents back and while at the party a kid would trick Kamala into taking a sip of orange juice mixed with vodka.  She would immediately spit it out but Bruno would come in to defend her which she thought was embarrassing and decided to leave the party.  After she left, a terrigen cloud would envelop Kamala into a cocoon and when she broke out of the cocoon she would find herself looking exactly like Carol Danvers as Ms. Marvel who was Kamala’s favorite Avenger.

After some messing around with her powers, she would see her friend, Zoe Zimmer, fall into a river near her after Zoe’s drunk boyfriend, Josh Richardson, accidentally push her in.  Kamala would run in as Carol Danvers and stretch her arm and hand out to scoop her up and save her life.

After all of this went down, Kamala would run back home and attempt to sneak back into her room but be caught and grounded by her parents for sneaking out.  The next day, Kamala would visit Bruno at his work only to see Bruno being mugged by his brother Vick (Vick was wearing a mask so Kamala was unaware that it was Vick).  She would shapeshift into Carol Danvers again to stop the crime only to be shot in the stomach with Vick’s gun.  After Vick ran out of the show, Kamala reverted back to her normal body in front of Bruno and she would discover that in doing so the bullet wound healed.

Bruno would tell Kamala that Vick was working for a villain called the “Inventor” and Vick would be kidnapped and guarded by teenagers working for the Inventor.  Bruno and Kamala would create a disguise for Kamala and she would attempt and failed to save Vick.  Because of this, Kamala went back home only to be caught once again by her parents.  Her father decided to sit down with her and told Kamala that when she was born her mother was believed to be unable to deliver children.  So when her parents gave birth to her older brother and later Kamala, they named her “Kamala” after the Arabic word “Kamal” meaning “Perfection” as Kamala was their perfect child (Sheesh, playing favorites much?).  This talk gave Kamala the courage to try another rescue attempt.  So with the help of Bruno, Kamala created another costume for herself and practiced using her powers some more before going in a second time and succeeded in rescuing Vick from the Inventor’s stooges.  She would then announce herself to Jersey City as the new Ms. Marvel as she believed that name belonged to anybody with courage (that and Carol was using the name “Captain Marvel” at the time so it wasn’t being used at the moment).

After this adventure, Ms. Marvel would hear that the Inventor has created genetically engineered alligators in the sewers and she would go to investigate. While down there, she would run into Wolverine who was looking for a runaway mutant and the two would have a little team-up adventure.  The most important thing to come out of this is Kamala told Wolverine at first that she was a mutant as that is what she thought she was for the first handful of issues.

However, after she explained the terrigen cloud to Wolverine, Wolverine realized that she wasn’t a mutant but an Inhuman (read more about Inhumans in my Comixplanations here – shameless plug) and sent word to Medusa who decided to send Lockjaw after her (it should be noted that Wolverine didn’t tell Kamala that she was an Inhuman so she was still unaware at this point).  When Lockjaw showed up, Kamala gave him a big hug and that image of Kamala hugging this giant Inhuman dog as so adorable!!!  She also asked her parents if they could keep Lockjaw which they kind of reluctantly allowed.

Kamala would look up the missing mutant Wolverine was looking for and once she found out Lockjaw could teleport she had Lockjaw teleport to where she believed the missing mutant was.  She would then encounter one of the Inventor’s minions in a robot suit and they would fight each other.  Once Ms. Marvel defeated the teenager, she would take him to the hospital (since he went into a coma) and head to school. 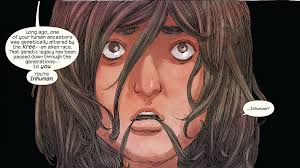 Little did she know, though, the robot left a tracer on her so once she got to school a bigger robot attacked looking for Ms. Marvel.  For some reason, Ms. Marvel’s powers weren’t working to their full extent so she had to try and hide her face as she fought the robot with Lockjaw’s help.  This did prove to much for her to handle as she was defeated and Lockjaw had to teleport them to New Attilan where Medusa would have her doctors heal her to full health and this is when Kamala learned that she was an Inhuman.

At this point, Kamala finally decided to take on the Inventor one-on-one but once she found the Inventor she was overwhelmed with the Inventor’s brainwashed stooges and robots.  Realizing that she couldn’t take the Inventor down by herself, she called Bruno who would call the police.  It wasn’t until Kamala was finally able to defeat the Inventor where the police would show up and arrest him.

Later after this, Secret Wars would happen and Jersey City would go into a panic.  During this, Kamala would finally meet Carol Danvers in person who teamed up with Kamala to help protect people while Secret Wars was occurring and in the end Carol told Kamala that she deserved to hold the title of Ms. marvel and told her that she would be available to help any time Kamala needed it.  While all this was happening, her mother and brother would learn that Kamala was Ms. Marvel. Also, something weird kind of happened with her brother where he kind of gained powers himself but this haven’t been brought up since so I’m not really sure whether or not he still has the powers.

And now we’ve reached All-New, All-Different Marvel and since this is kind of current I’ll only go over where Kamala is at currently so you can decide where to read her.  Her solo series as of right now continues off of her first solo series and is still written by G. Willow Wilson and minus one thing that happened in her Civil War II tie-in I’m really enjoying it.  She’s also part of the All-New, All-Different Avengers and she started a new team with other Marvel teenaged heroes called the Champions.  Overall, Ms. Marvel is consistently one of Marvel’s best books and G. Willow Wilson has done a great job with her character.  The day when G. Willow Wilson retired the Ms. Marvel title and allows another writer to take over is the day that I’ll mourn because I absolutely love her writing on Kamala.

So what are your opinions on Kamala Khan?  Love her?  Hate her?  Cast your vote below!