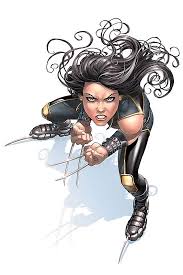 Hello interweb, Nate here.  So with Logan coming out in a few days and the cinematic debut of my personal favorite X-Men, X-23, I thought I should get a character bio up for this chick sooner then later.  So with that this will be a somewhat special Character Bio since I want to give my opinions of X-23 being featured in Logan prior to seeing the movie so that will be near the end of this Bio. END_OF_DOCUMENT_TOKEN_TO_BE_REPLACED

Hello interweb, Nate here.  So I meant to do this Character Bio along side the one I had for Miles Morales/Spider-man a little bit ago but these Character Bios are actually some of the longest posts it takes for me to write since it takes more research than a simple review and requires more details than simply gathering a bunch of facts about a character.  With that said, I absolutely love this character and really wanted a bio out of her for your entertainment and possibly have you guys fall in love with this character if you haven’t already. END_OF_DOCUMENT_TOKEN_TO_BE_REPLACED

Hello interweb, Nate here.  So as promised in my Spider-Gwen – Character Bio, today I’m doing a character bio for Miles Morales aka the second Ultimate Spider-man.  I do want to get a few more character bios out and since this week is Thanksgiving Break for my school I finally have the time to do it.  So if there’s a character that you really want to see a bio on feel free to comment below and I’ll do my best to get it done.  With that said I should stop stalling and get this bio started so here we go! END_OF_DOCUMENT_TOKEN_TO_BE_REPLACED

Hello interweb, Nate here.  So I figured with All-New, All-Different Marvel going on right now this is the perfect time to start reading characters that you’ve never read before.  So I decided to go over the history of Spider-Gwen and Miles Morales.  I’ll probably have Mile’s bio up soon but right now it’s all about Gwen. END_OF_DOCUMENT_TOKEN_TO_BE_REPLACED 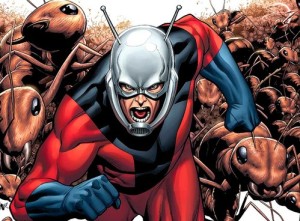 Hello interweb, Nate here.  A while ago (can’t remember when) PopcornandJellybeans requested a character bio about Ant-man (I assume do to the upcoming Ant-man movie).  While I had this bio almost finished, I learned that the Ant-man the movie will be focusing on is not Hank Pym, but his successor Scott Lang.  This ticked me off (pun unintended) not only because that mean I’ve been spending weeks working on the Character Bio of the wrong character, but the Ant-man I personally have been waiting to show up ever since the first Avengers movie came out won’t be coming.  Either way, I’m not going to let this change make me throw away this bio simply because they chose the wrong Ant-man so here you guys go.  Whether or not I’ll do Scott Lang is unknown right now, I may do him closer to the movie’s release date (July 17) or not at all.  Either way here’s Hank Pym’s Character Bio, you can see my other Character Bios here.

END_OF_DOCUMENT_TOKEN_TO_BE_REPLACED

Happy New Year interweb, Nate here.  So the schedule of this post is kind of confusing as I meant for this to be my very first post on my blog of 2015, but obviously it isn’t since yesterday I posted my Civil War Review as I’ve been holding back on that post for quite some time now and I felt that it needed to get posted.  So while this technically isn’t the first post of 2015, I might treat it as it is as there are things I plan on doing with this new year.

Before I get to talking about what’s yet to come I should get us introduced to this post.  So I’ve had this blog for 9 months now (excluding this month), I have a total of 49 followers, and my most viewed post has had 273 views.  Now in comparison to other big blogs that may not be that big, but I’m 15-years old I have 49 people who has basically said “I like the content on this blog” and my most viewed post has 273 views.  Honestly, how many 15-year old can honestly say what I have just said?  Not a lot.  So honestly, thank you guys for reading this blog and supported me through 2014.  And I bet this paragraph has definitely shown that I’m a modest person :P.  So this post is going to be based purely by views.  No favoritism, no biases, no anything in that nature (except I am taking the Character Bio Format as that’s technically isn’t a post and would have normally made the number 5 spot on here).

With the upcoming posts I have several things in the works.  For one my Ant-Man Character Bio is almost done and originally I was going to wait til closer to the release date, but considering that this thing comes out in July I’m probably going to simply post it within a couple of weeks.  I also have several other Character Bios and Character Compares in the works so keep an eye out for those.  I’m just going to go ahead and spoil one of each, for the Character Bio you can expect to see one on X-23 and a Character Compare comparing Green Arrow to Hawkeye.  There is also a brand new series that I have planed that will probably debute some time this month or early on next month.  So a huge chunk of 2015 will be the usual Top 10s (or 5s), Character Bios, Character Compares, and an unannounced series.  And with that monster of announcements, let’s go over to out list!

To see my other Top 10s (or 5s) click here. END_OF_DOCUMENT_TOKEN_TO_BE_REPLACED 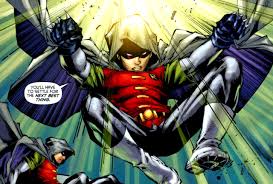 Hello interweb, Nate here.  So you may notice that I called this Robin the fifth Robin even though this is my forth Robin bio.  That is because the Fourth Robin is technically the blink-and-you’ll-miss-her Stephanie Brown who is my personal favorite Robin (I like the other Robins best when they change their ID, Nightwing, Red Robin, etc.) and had an extremely short run as Robin and as a result isn’t that significant to the other Robins.  There is also Carrie Kelley who was a non-cannon Robin but due to the fact that the non-cannon story The Dark Knight Returns is one of the most famous Batman stories, people like to include her.  And so I decided that that is the poll for today: Do you want me to do a Bio on the two remaining Robins?  And you can choose between Stephanie Brown, Carrie Kelley, Both, or Neither.  Either way, I’m not going to get to them before I complete my reader-requested Ant-man Character Bio.

With that mouthful of announcements aside, I did a Character Bio for Dick Grayson, Jason Todd, and Tim Drake.  Now for the fourth male Robin, the fourth main Robin, and the Fifth Robin in general: Damian Wayne, the true son of Batman. END_OF_DOCUMENT_TOKEN_TO_BE_REPLACED 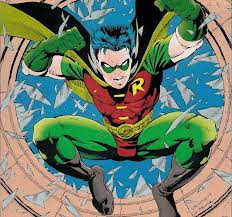 Hello interweb, Nate here.  So as of lately I guess it’s kind of obvious that I have been busy as I haven’t posted last Monday nor this past Saturday.  However, I did get the Tim Drake Character Bio finished and ready for ya’ll to enjoy.  So first we did the first Robin: Dick Grayson, then the second Robin: Jason Todd, now it’s time for the third Robin to get some love.

Also, I’ll try to get Damian Wayne’s bio done soon (the fourth male Robin).  Since I have already promised a reader that I’ll get an Ant-man bio up (he or she probably requested it for the upcoming Ant-man movie), I’ll probably get to Stephanie Brown later on and maybe Carrie Kelley (she was a Robin in the non-cannon graphic novel Dark Knight Returns)  if you guys want (comment below).  But the biggest post this month is going to be a Halloween themed post: The Top 10 Most Disturbing Marvel and DC Characters.  I already came up with a few, but I want you guys to either comment below or on my Facebook fan-page on some characters that you find disturbing.  The rules are basically as long as the character belongs to DC or Marvel, it qualifies (which mean it can be a superhero or villain, although I’ll bet most, if not all, of them will be villains). END_OF_DOCUMENT_TOKEN_TO_BE_REPLACED

Hello interweb, Nate here.  So due to Labor Day weekend, I have no school today so I figured I might as well do this little bio for you.  A few weeks ago, I did the character bio for Dick Grayson, who was the first Robin and the Robin most people think of when they hear the name.  So today, I’m talking about the second Robin: Jason Todd.  If you didn’t know that it was actually thee fans who killed him, then keep reading. END_OF_DOCUMENT_TOKEN_TO_BE_REPLACED 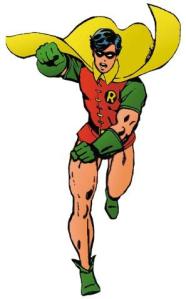 Hello interweb, Nate here.  So not too long ago I posted a poll for my next Character Bio and nobody voted.  However, one person requested a Dick Grayson bio so hey, why not?  So today, if you didn’t know that he’s not only been the first Robin and the first Nightwing (thanks to Superman), but has also been the second Batman, than keep reading!