Hello interweb, Nate here!  My first Pride Month special!  I’ve always meant to do one of these but every time I found the time to do one Pride Month was over and I didn’t really want to do a Pride Month special if it wasn’t during Pride.  I also wanted to get this out on the 26th since that marked the second anniversary of gay marriage being legalized in all 50 states in America, but I got busy on a Youth retreat and thus didn’t have the time to complete this.  Maybe in future years I’ll be able to create a tradition of releasing a Pride special every year on June 26th but don’t get your hopes up.  Enough beating around the bush, this list consists of my Top 10 Favorite characters in comics or comic book adaptations that identify as LGBT.  Leggo!

#11 –  Deadpool: Deadpool is defined as “pasnsexual” or “omnisexual” by many fans after Gerry Duggan confirmed this in a Tweet a few years ago.  I mean, he was briefly married to a alien cow so this isn’t completely out of left field.   (No seriously, that happened.  Google it!)  Now considering that Deadpool is my favorite character in comics you might be wondering why he’s so low on this list.  Well, that’s mostly because many fans accuse Deadpool as “queerbait” and it’s not hard to see why.  For you normies out there who don’t know what that means, basically “queerbait” in fiction refers to when a writer hints or confirms of a character’s queer identity but never actually follows through with the proper representation.  Because of this, I’m only putting Deadpool in the honorable mentions.

Most comic book readers basically knew of Wonder Woman’s same-sex attractions throughout the years do to the fact that Diana lives on an island full of women who has been hinted at being bunch of lesbians throughout the years.  This, plus her creator was in a polygamous marriage and incorporated some BDSM themes in the early comics (You know!  For kids!) so it’s not like her creator ever intended for her to be a traditional woman from the start.  However, due to the high-profile status that Wonder Woman possesses, I guess DC has been nervous about making it official until quite recently.  Although there was very little backlash when this was confirmed by current Wonder Woman writer Greg Rucka so I feel like this just kinda shows how society has progressed throughout the years.  The only reason Diana is so low on this list is the fact that I actually haven’t been reading Rucka’s run so I have no opinions on how well this has been handled in the DC Rebirth comics.

So I’ve had problems with Iceman coming out as gay.  From the way he came out (for all we know, Jean used her telepathic powers to forcibly change his sexual orientation) to the fact that Iceman was confirmed straight all the way back in the 60’s with Uncanny X-Men #1.  However, the scene where young Bobby confronted older Bobby was actually really well written and Dennis Hopeless’s run on All-New X-Men has done a great job at young Bobby’s relationship with Romeo in a really cute relationship.  Unfortunately the RessurXion Iceman title recently came out focusing on older Iceman and I just really didn’t like it.  So overall, I don’t think Iceman should be gay but at least it seems like he’s sometimes written well!

John Constantine is an interesting character that I wish I read more of.  He’s one of the few bisexual men in comics and his adventures with magic and demons are fun to read.  I do kinda feel awkward putting him on this list since in all honesty I haven’t read a lot of his stories.  But the few comics I have read of his were fun to read.

I love the Runaways and I’m excited for the upcoming Hulu series, but one character I’m curious about how they might deal with is Karolina Dean.  The Runaways is a band of superpowered kids who ran away from their supervillain parents.  Karolina is an alien who can manipulate light in order to allow her to fly and shoot lasers kinda like Starfire.  The biggest difference is that Karolina glows rainbow colors when using her powers (I wonder if that was done on purpose…).  I also kinda liked how she came out since earlier in the series her orientation was hinted at when she stopped mid-fight tell a girl she was pretty and later on tried to kiss fellow team member Nico.  She mistakenly thought Nico went gay since she stated she was done with boys after her ex-boyfriend turned out to be a supervillain. Nico was pretty understanding and the two remained close friends which I really admired.  The only thing I disliked was that  Karolina eventually ended up with a skrull who was technically male but used his shape-shifting powers to appear female (comics are weird).  I actually stopped reading Runaways a while ago so I’m not sure how that situation went but I just didn’t like how she ended up dating a technically-male skrull.  If they do decide to keep her gay identity in the Hulu series than I hope they don’t go this route with her.

The ironic part about Batwoman rest in her history.  Back in 50’s, a psychologist named Frederic Wertham was attacking comic books claiming they were corrupting the youth of America (kinda like how a lot of people claim video games cause school shootings today).  One criticism he made was towards Batman and Robin stating that they were in a gay relationship.  Yes, the issue was that Batman and Robin was gay not that Dick was 12 and Bruce was in his 30’s maybe 40’s.  “Being gay is not okay!  But being a pedo makes a fine fello!” (Also ironic considering that a lot of people compare homosexuality with pedophilia even though one is clearly rape and evil).

Anyways, enough ranting, because of this controversy DC creators created Batwoman and Batgirl as love interests to prove that these guys are totally straight.   Decades later and Batgirl would evolve over the years to be the Batgirl we know today.  Batwoman, on the other hand, was rebooted as a lesbian. Oh the sweet sweet irony.  The only problem was that Batwoman had a girlfriend in the New 52 and even proposed to her, but DC CEO, Dan DiDio, made a “Superheros aren’t allowed to marry” rule which caused conflict with the creative teams on Batwoman.  Many fans saw this as a way to prevent a gay marriage but, as much as I found the rule to be complete garbage, don’t really think we can blame Batwoman for it since this applied to all DC heroes.  Either way, Batwoman is a total badass and her New 52 run was really good up to the point where the original creators quite over this controversy so I recommend checking it out!

BTW, I really should make a Batwoman Character Bio since she really is a cool character outside of her gay identity

Remember above when I talked about Frederic Wertham’s effect on Batwoman?  Well, he also effected Mystique over the years.  Christ Claremont, often considered the greatest X-Men writer of all times, created Mystique and intended for her to be in a same-sex relationship with the character Destiny.  The only problem was  Wertham’s work caused the creation of the Comics Code Authority which created rules for comics to follow including a “No homos allowed” clause.  It was because of this that Mystique and Destiny’s relationship was only hinted at as subtext within the stories.  Mystique would even be written as a straight woman by several writers until the Comics Code Authority was abandoned and her relationship with Destiny could finally be openly dressed and reveal her as bisexual.  Now I just want Kitty and Illyana to finally get an on-screen kiss.

Out of all the Netflix shows, Jessica Jones is probably my favorite.  Now Jeri Hogarth doesn’t actually have anything to do with why I like the series so much, but that doesn’t mean I didn’t like what the show did with her character.  Jeri Hogarth was actually a man in the comics named Jeryn Hogarth.  They changed his gender in the TV series and turned him into a lesbian which I actually thought was a pretty cool move.  Throughout the series, Jeri deals with the drama of divorcing her ex-wife while handling a relationship with a current girlfriend.  I like this because it shows gay characters dealing with relationship problems that a lot of people go through and it’s never really treated as forced.  They just so happen to be gay and just so happen to be dealing with relationship problems.

While in Japan, Wolverine married a woman named Itsu.  Itsu would later be killed by the Winter Soldier and Daken would only survive due to his healing factor.  Daken’s relationship with his father, Wolverine, is very strained and their conflict is interesting to read.  His ambiguous morality also makes him an interesting character to read as he uses his bisexuality to manipulate others to get what he wants.

Every body knows Harley Quinn and her backstory by now due to the popularity of her character.  She was manipulated by the Joker and fell in love with him only for him to abuse her constantly.  This abuse that Harley has taken over the years has made her a very complex an interesting character that many fans have enjoyed. While her relationship with Poison Ivy was originally meant to be BFFs, it has evolved over the years to become more sexual/romantic.  Although Paul Dini, co-creator of Harley Quinn, has drawn some less-than-approrpiate comics between the two characters so maybe their same-sex relationship was always meant to be cannon.  Either way, I think that Harley deserves a healthy relationship after all the abuse she received from Joker and who better than Poison Ivy?  Even though the her current run recently introduced Red Tool, an obvious Deadpool stand-in, to become a love interest I honestly just think they should focus on the Harley Quinn/Poison Ivy relationship for a while before moving on. 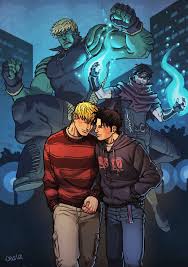 Marvel has always been better than DC with LGBT characters and the Young Avengers is  a huge testament to that.  Ever since the first run, Wiccan and his boyfriend Hulkling has been one of the best-written same-sex relationships in comics and Wiccan has always been my favorite of the two.  He’s the soul-son of the mutant Avenger Scarlet Witch and his magical powers derives from her.  His relationship with Hulkling is also interesting outside the “gay” aspect since Hulkling is half-Kree half-Skrull and therefore has had conflict with his heritage that Wiccan has helped him through.  I just hope we get another Young Avengers series so we can see even more  of their relationship unfold.  Or a Wiccan solo series with Hulkling being a constant presence or a Wiccan and Hulkling series staring both of them.  Although, considering Marvel’s current stat, that book might be poorly written and I wouldn’t want that.