Hello interweb, Nate here.  So first we have female Thor, than we had Black Captain America.  How could we make the Avengers any more PC?  I know!  Make Iron Man a 15-year old black chick!  Yay!

So Tony Stark is hanging up the armor and Riri Williams, a black teenage girl from MIT University, created her own armor in her dorm and decides she wants to be the next Iron Man.  So what do I think of the situation?  It’s stupid.  Pretty simple.  Now I’m actually  lot less mad than I’m letting myself on to be right now because while I find it dumb, I don’t really like Tony Stark.  I like the suit, I like the cool gadgets, and I like the idea that you can be smart enough to create your own battle suit and go around protecting people, but Tony is kind of a jerk.  He’s funny sometimes but in the end he’s just too much of a jerk for my taste.  I remember reading somewhere that Stan Lee created Tony Stark to be the most unlikable person you can read about and force you to like him.  Unfortunately I never did.  So because of that I feel kind of guilty saying I really don’t care about the new Iron Man, but it’s true.  I think it’s dumb and just a way for Marvel to get even more PC, but in the end it’s just getting dumb.

Now Brian Michael Bendis, the creator of Riri, actually commented on this and he stated:

“Thankfully because of my involvement in the creation of Miles Morales and Jessica Jones and some other characters, it’s getting the benefit of the doubt from even the most surly fans. There are fans who say, ‘Show us the new stuff,’ and then there are fans who say, ‘Don’t do anything different from when I was a kid.’ So when you’re introducing new characters, you’re always going to have people getting paranoid about us ruining their childhood.”

Now Jessica Jones was an original character created for the Marvel MAX imprint that are essentially R-rated comic books with her book being “Alias”.  I have no problem with her whatsoever and I feel like there’s no real controversy to her character as far as I can tell (even getting some praise for tackling topics like rape).  I never read Alias, never saw her Netflix series, and I only read her from “Young Avengers” and I think she had a brief cameo in a Deadpool comic.  However she is an original character so really I never saw her as being part of Marvel’s PC movement, I always just saw her as a pretty cool female character.

Miles Morales, on the other hand, I have seen as being part of Marvel’s PC movement as he’s well known for being the Black Spider-man but I honestly find him to be one of the less annoying PC characters; heck, I love the guy!  Now I linked my Character Bio of his earlier but incase you don’t want to read it and don’t know Mile’s story let me sum it up for you.  Miles Morales was originally created for the Ultimate Marvel Universe on Earth – 1610 to replace that universe’s Peter Parker and add more diversity to the comics.  However the biggest difference here is that Miles made a name for himself in an alternate universe so most people didn’t really care.  Even now that Miles is on Earth – 616, Earth – 616 Peter Parker is still around so really I feel no reason to dislike the guy.  Granted his immortality and that recent OP energy blast thingamajig is stupid as heck, but as a character I’ve loved his story since his first comic book run.

Now one thing is this whole PC movement thing Marvel has been doing for their comics has gotten me thinking a lot recently and I’ve made strong opinions about this topic before and some of my opinions have changes slightly after debating a lot of people.  Thor being a woman and Captain America being Black are both things that I was highly against and still am.  The thing is people are interested in Thor for Thor, people are interested in Captain America for Steve Rogers, and people are interested in Iron Man for Tony Stark.  So when people say “Oh Thor’s not really a woman, it’s a different character taking the role” I have to role my eyes because that still means Marvel is getting rid of Thor (hopefully temporarily but the longer it lasts the more worried I get) and giving us a different character with the same powers who just happens to be a lady.  This is the same case, they’re not turning Tony Stark into a black chick, they’re giving a black chick the Iron Man armor and saying good bye to Tony Stark for a bit.  That still means that people who are fans of Tony Stark is going to lose possibly their favorite character and have this imposter flying around claiming to be the new Iron Man.

Now does that mean I would much rather them turn Tony Stark himself into a black girl so fans of the character still gets to keep their character?  No course not!  Besides the fact that that’s just kinda weird and creepy, people who likes Tony likes him for who he is and when you take that away from him than the thing you love about the character is gone.  I brought this up with the last post where I was talking about queer superheroes and while I feel like most straight superheroes should stay straight I feel like it’s okay for the character to come out if it makes sense for the character and the world they live in.  You can be assumed straight your whole life and then come out as gay at some point down the line, but you can’t be assumed White your whole life and then come out as Black.  Now most characters don’t make sense to be straight so when a character is reestablished as queer than it can easily come off as comics being PC and get annoying.  I’m still a little peeved at Iceman coming out as gay since it literally came out of nowhere with no build up whatsoever and comes off as more PC nonsense.  If they would have made Magyk gay than that would be believable since she never been in a relationship before so you could easily see her as just a closeted gay person (which is my current headcannon regardless on whether or not it’s true) so it wouldn’t really come out of nowhere.  Deadpool was outed on social media by Gerry Duggan as being pansexual and that made sense considering Deadpool’s personality and his willingness to “do” anything (granted I would appreciate it if they mentioned it in the comics outside of jokes and remarks that can be interpreted as a straight guy making a joke but hey).

DC kinda did something like this with Wally West and many fans (I included) hated it because those of us who love Wally hated to see his character change to that of a Black dude for PC SJWs out there.  Fortunately enough DC Rebirth (which has re-sparked my love for DC) gave us back the true Wally West but is keeping the Black Wally around as a different character; and I’m cool with that because you can have your Black Wally for diversity purposes and I can have my redhead Wally for fanboy purposes.

Now in the end, why is this happening and why is Marvel so bad at this?  Well basically Marvel is going total PC police right now. A bunch of SJWs who don’t even read the comics are looking at the problems with comics (not enough women, not enough people of color, not enough LGBT representation, etc) and criticizing them. And because there are so many SJWs out there, Marvel is catering to these people and is changing the characters to be more PC. the problem is these people don’t actually read the comics and the fans who do read comics are getting screwed over. Are there some comic book readers who agree with these SJWs? Probably, sure! But the majority of fans are hating the PC take over Marvel is going through and I for one is one of them.

I found some comics on instagram a while ago that basically sums up the situation perfectly.  I’m not exactly sure where the originals are from so if you recognize them than let me know where the original source is so I can link you to them and give them the credit for these. 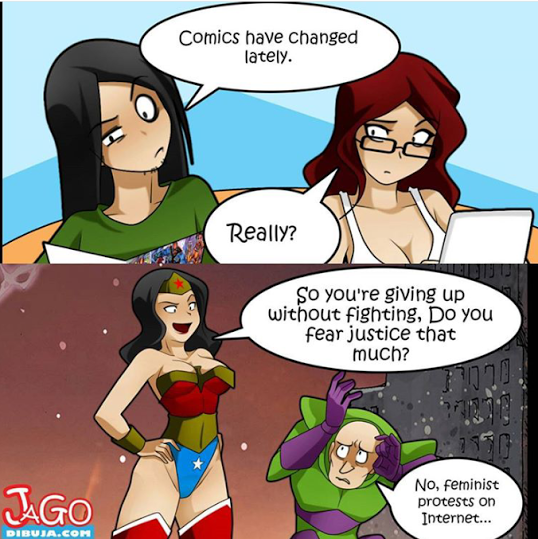 So how do you feel about Riri?  Love her?  Hate her?