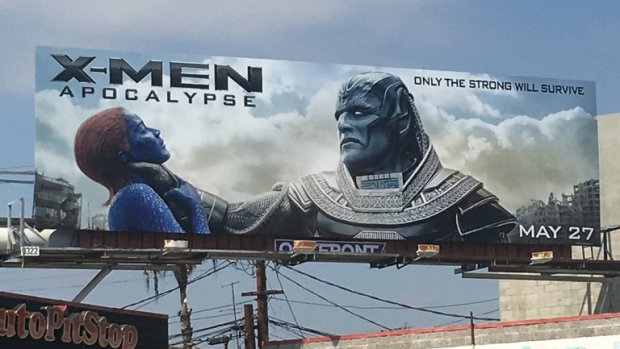 Hello interweb, Nate here.  So X-Men: Apocalypse it theaters this past weekend and yes I saw it.  I’ve been slow to review it because to be perfectly honest I really don’t want to.  It was bad as to be expected from a Bryan Singer X-Man movie and as the huge X-Men fan that I am it did kinda just annoy me on how poorly they adapted the characters for the film.  Now with that said, I will review the movie and that review will probably be up either tonight or tomorrow but in the mean time the advertisement for the film seems to be attracting more controversy than the film itself.

So a woman named Rose McGowan, who I personally have never heard of in my life, recently complained about the billboard advertisement for the X-Men movie where Jennifer Lawrence’s character, Mystique, is being choked by Oscar Issac’s character, Apocalypse, who is the villain of the movie.  As quoted by McGowan found on the Hollywood Reporter:

“There is a major problem when the men and women at 20th Century Fox think casual violence against women is the way to market a film. There is no context in the ad, just a woman getting strangled. The fact that no one flagged this is offensive and frankly, stupid. The geniuses behind this, and I use that term lightly, need to to take a long hard look at the mirror and see how they are contributing to society. Imagine if it were a black man being strangled by a white man, or a gay male being strangled by a hetero? The outcry would be enormous. So let’s right this wrong. 20th Century Fox, since you can’t manage to put any women directors on your slate for the next two years, how about you at least replace your ad?”

Now I’m kinda curious, did McGowan actually watched the movie?  Because if she actually saw the movie than she’d know that that picture was taken from a scene in the movie where Apocalypse chokes Mystique after she does some stuff with her shape-shifting powers (spoilers).

In the movie, Apocalypse is the bad guy and Mystique is one of the heroes.  The thing that annoys me is that if the billboard instead chose to use the scene where Apocalypse shoves Professor X to the floor and you see a giant Apocalypse with Professor X under his giant hand, people wouldn’t care!  Heck, if any male character was being taken down by Apocalypse than this wouldn’t be controversial.  But because Mystique happens to be a woman this promotes “casual violence against women”.

The superhero genre features violence because superheroes are crime fighters.  Now I won’t deny that there are some gender-based problems within the genre, but I don’t believe that the genre is as sexist as a lot of people make it out to be.  If you are a superhero and you are facing a super powerful villain, like Apocalypse, than you have to expect the possibility of getting hit, punched, harmed, killed, or (yes) choked.  To tell me that women in these types of stories can’t be harmed in some way, shape, or form, but men can I find to honestly be more offensive because that’s suggesting that men can handle the violence but women aren’t strong enough to.  But no because the ad is showing a male character choking out a female character than it’s sexist and is promoting violence against women.

Heck, Mystique is a villain in the comics and has done some horrible stuff within her history and McGowan is completely ignoring that (or, more likely, is ignorant of it).  Within the Marvel comic books, Mytique has killed men, women, and children, and while she has done good things before, she’s usually depicted as a rather vile character.  The only reason she’s presented as a hero within the film is because she’s being played by Jennifer Lawrence whose a popular actress thanks to Hunger Games.  But if Mystique has done some vile things in the comics (such as murder) than why is it so wrong to see her being choked like this by the villain of the movie?

Here’s another quote of hers about the “issue”:

“I’ll close with a text my friend sent, a conversation with his daughter. It follows: ‘My daughter and I were just having a deep discussion on the brutality of that hideous X-Men poster yesterday. Her words: ‘Dad, why is that monster man committing violence against a woman?’ This from a 9-year-old. If she can see it, why can’t Fox?”

Now first off I do want to add that that wording seems kind of odd for a 9-year old to say so I almost doubt the validity of this conversation.  However for the sake of argument let’s assume that this really happened.  If I was the dad I would’ve simply reply with: “The monster man’s name is Apocalypse and Apocalypse is an evil, evil man.  He wishes to destroy the X-Men and Apocalypse does not discriminate is violence to men or women.  He wants to destroy all of the X-Men equally because the X-Men are superheroes.”  That’s it!  It’s not lying, it’s not stretching the truth, and it’s not watering anything down in fear that it might be too much for a 9-year old to handle.  That’s exactly what happens within the context of the film and that is what they are advertising and there is nothing wrong with that.

Now before I end this I really should point something out.  Within the context of the Singer X-Men universe, Mystique has been established to be a strong fighter and a dangerous mutant.  So with that said, isn’t the billboard advertising how powerful Apocalypse is considering how strong we know Mystique is?  Granted Mystique isn’t the most powerful mutant established within the universe, but unless you were a powerful character it’s not likely that you would even be able to think about being in that position shown within the ad.  So at the end of the day the advertisement is simply showing you how powerful Apocalypse is in hopes that you’ll spend money on this movie.  Although please don’t because it sucked and the rights to the X-Men should go back to Marvel.