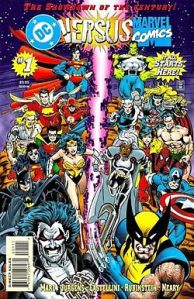 Side note: As most of you know, the second official Batman V Superman trailer recently been released.  So despite the fact that we’re in the middle of 90’cember, I thought I’d post a trailer review of it tomorrow.  You guys seem to enjoy those types of posts so what the heck!

First a little background on the comic.  DC Vs Marvel (#2 and #3 being called Marvel Comics Vs DC for some reason) was a 4-issue miniseries written by Ron Marz and Peter David and drawn by Dan Jurgens and Claudio Castellini.  The story focuses on two entities that embodies both universes respectively discovering that each other exists and decides that only one may survive.  This causes them to select different characters from their own universes to fight each other and the universe with the most wins get’s to survive while the losing universe is destroyed.  Although this takes place outside the main continuities so it truly wouldn’t effect anything.  There was eleven battles in total but the results of five of the battles where voted on by the fans.  The six battles that the writers chose the result of includes the following: Aquaman (DC) Vs Namor (Marvel), Catwoman (DC) Vs Elektra (Marvel), Flash (DC) Vs Quicksilver (Marvel), Robin (DC) Vs Jubilee (Marvel), Green Lantern (DC) Vs Silver Surfer (Marvel), and Captain Marvel (DC) Vs Thor (Marvel).  The five fan-voted battles includes: Superman (DC) Vs The Hulk (Marvel), Superboy (DC) Vs Spider-man (Marvel), Batman (DC) Vs Captain America (Marvel), Lobo (DC) Vs Wolverine (Marvel), and Wonder Woman (DC) Vs Storm (Marvel). 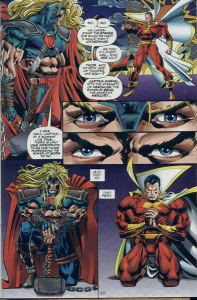 The first battle in the story was Captain Marvel Vs Thor.  This pair up makes sense considering that Captain Marvel gains his powers from gods while Thor literally is a god.  Like most of the battles during this series, this battle was short and was over fairly quickly.  Thor slammed Captain Marvel into a carnival rides that crashed on top of him.  In order to get out of the debris, Captain Marvel reverted back into Billy Batson who was small enough to slip through the garbage.  Billy attempted to switch back to Captain Marvel but Thor threw Mjolnir to deflect the lightning and this somehow causes Billy to pass out, allowing Thor to claim victory.  Personally I kinda wished the fight ended in a more epic way.  I didn’t really understand why that defeated him and even if it did make sense it would’ve been cooler for Thor to win by slamming Mjolnir into his face or something.  Either way, DC: 0, Marvel: 1 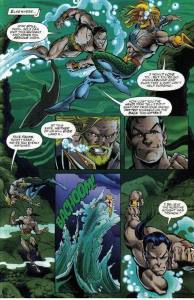 Aquaman Vs Namor (Side note: what the heck happened here?)

The next battle was Aquaman Vs Namor.  This fight seems pretty obvious since their both rulers of underwater kingdoms; although I personally know less about Namor than I do Aquaman so I’m not quite sure how they differ power-wise.  The fight seemed evenly matched at first, and Aquaman even points this out, but Namor basically shoots him out of the water through a wave or something (it was hard for me to follow so blame the artist or the writer here).  In the end, Aquaman commanded a whale to jump out of the water and land on Namor allowing him to claim victory. DC: 1, Marvel: 1 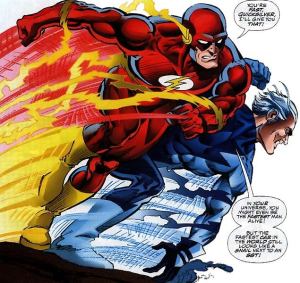 The next battle was between Flash (I want to say Wally West based on his mask but I could be wrong) and Quicksilver.  They both have super speed and are some of the fastest characters in their respective universes (I’m pretty sure Silver Surfer is faster than Quicksilver).  During the fight, a semi truck almost crashes into the two resulting in Flash to quickly save the people inside.  While distracted, Quicksilver attacks Flash but Flash proves to be faster and manages to land a blow and defeat Quicksilver.  DC: 2, Marvel: 1

The fourth battle was between Robin (Tim Drake) and Jubilee.  I find this match up kind of odd but I guess it makes sense since they’re both teen superheroes.  Although this was kind of an odd fight since they both met each other and been talking since issue #1 and their fight takes place in issue #3 so the two developed small crushes on each other.  Robin even stated when it was over that he never planned on punching her.  He won by tricking her into attacking his cape (that he hung from some pipes) and than tied her up.  DC: 3, Marvel: 1

The next fight was Green Lantern (Kyle Reyner) Vs the Silver Surfer.  Neither of them wanted to fight the other but they knew the situation required it.  Green Lantern created armor and some type of metallic dragon thing and the two beings ran right into each other to cause a huge explosion.  The explosion caused GL to go unconscious but Silver Surfer remained unfazed and stated how this was his most regretted victory he ever experienced.  DC: 3, Marvel: 2 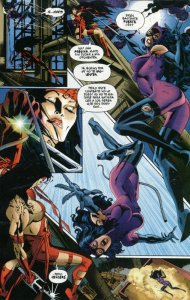 The final battle where the outcome was decided by the writers was between Catwoman and Elektra.  Neither of them have superpowers but Catwoman is very athletic and agile while Elektra is a trained assassin.  Catwoman attempted to hit Elektra with her whip but Elektra grabbed it and threw Catwoman off the building.  I kinda feel like Catwoman should’ve been agile enough to save herself in this situation but either way Elektra defeated her.  DC: 3, Marvel: 3

The first match to result in fan votes is between Lobo and Wolverine.  Both of these guys have super strength and similar personalities so I guess it’s a fair comparison.  They’re in a bar and Lobo slams a hook into Wolverine’s chest.  Although thanks to his healing factor it doesn’t do much.  You then see Wolverine extend his claws and pounce on Lobo.  They fall behind the counter fighting and all you see is Wolverine standing up and begins to smoke a cigar.  I don’t know about this, Wolverine is strong but Lobo has gone toe to toe with Superman in the past.  Either way, DC: 3, Marvel: 4 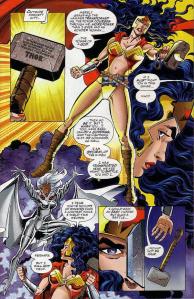 Wonder Woman Vs Storm (Side note: Wonder Woman goes back to her classic costume once she drops Mjolnir)

Next we see Wonder Woman face off against Storm.  I guess this match up makes since considering that Storm can control the weather and has been considered a goddess in her past while Wonder Woman gains her powers from gods.  Wonder Woman actually start the fight wielding Mjolnir (and given a even more ridiculous outfit) after Mjolnir flew off during Thor’s battle.  However seeing her weapon as being unfair power, she drops it before the fight (is it just me or is this out of character?).  However Storm shoots Wonder Woman with lightning until she passes out.  I know that this was fan voting but I’m surprised by this outcome.  For starters, Wonder Woman is a much better known superheroine than Storm and I always though she was more popular.  Then again the X-Men was at their peak during the 90’s and they even had their cartoon so maybe that did help with Storm’s popularity.  Although I feel like it should’ve taken more than a few lightning bolts to take down Wonder Woman; even without Mjolnir. DC: 3, Marvel: 5

Next up is Spider-man Vs Superboy.  This match up seems kinda odd at first but this is actually then Ben Reilly Spider-man.  Long story short, Ben Reilly is a clone of Peter Parker and Superboy is a clone of Superman.  I guess this was taking place during the Spider-man Clone Saga but I have to admit I actually don’t really know that much about that and never read it.  Either way, Superboy starts by attacking Spider-man with his tactile telekinesis but Spider-man dodges the attacks.  While Spider-man’s not looking, Superboy travels under the docks their fighting at and attack from underneath.  Superboy than decides to throw himself right at Spider-man but Spider-man dodges and web’s him up to electrical wires causing him to be electrocuted.  What is up with all these strong characters being defeated by electricity?  I know that Spider-man has always been more popular so this voting result isn’t a surprise, but I feel like they could’ve came up with something else.  Either way, DC: 3, Marvel: 6

Next Superman face off against the Hulk.  Both of these characters have immense power so this is an ideal fight.  The Hulk takes first blow and punches Superman into a nearby rock.  Superman than gets up and shoots heat vision at Hulk to stun him.  The two than attacks with all their strength before Superman overpowers Hulk.  I’ve always personally felt like Hulk would take down Superman since he has limitless strength but I can see this as a possible outcome.  I feel like the battle would normally be longer but all of these battles are short anyways so it’s not like it’s an unfair fight.  DC: 4, Marvel: 6

Captain America faces off against Batman.  Captain America is superhuman in strength but Batman still has skills in strategy.  The two battle out in the sewers but stops to conclude that they’re evenly matched.  Suddenly a wave of sewer water hits Cap as he throws his shield causing the shield to miss.  Batman throws a Batarang and hits Cap in the head, claiming victory (although Batman does bring Cap up to the surface alive).  DC: 5, Marvel: 6

So in case you didn’t notice, the writer decided battles ended in a tie (3 to 3) specifically so the fans would vote for Marvel or DC to win.  Marvel won by one battle (3 to 2) so the Marvel universe was destroyed…right?  Well actually no, in a last ditch effort to survive the two entities fused into one and combined their universes into one universe with fused characters.  This universe was went under the name Amalgam Comics and we’ll talk about that more in-depth next week.  Yup, a cliffhanger!  See ya next week!

So I originally planned to end 90’cember by going over the Death of Superman since that story line is probably one of the most iconic story lines of that specific decade and I needed a DC oriented post since I’m also planning on going over Marvel 2099.  However, since Doomsday plays a major part in that story and he’s been confirmed to be showing up in Batman V Superman, do you guys just want me to go over him instead?  Either way I’m going to end up talking about him but depending on which is voted higher I’ll either talk more in-depth about Doomsday (including his origin, Death of Superman, his comic book appearances after Death of Superman, and his appearances outside of comics which will probably include more of my opinions on him appearing in Batman V Superman) or just the story line Death of Superman (including why the story was made, what happened during then story, what resulted from the event, and real world effects of the comic).