Hello interweb, Nate here.  So Monday I talked about what is going on with Convergence, and Yesterday I reviewed Convergence: Superman #1.  Today I review Convergence: Batgirl #1!  Let’s geth this review going!

After the dome went up, Stephanie Brown quite being being Batgirl.  One year later, the dome goes down and Stephanie is selected to be Pre-Flashpoint Gotham City’s champion and as such Red Robin (Yum!) and Black Bat needs to help her get back into shape so she can actually fight well.  This issue was really good.  I loved the interactions between Stephanie Brown, Tim Drake, and Cassandra Cain and I love how Steph is coming back into the comics as Batgirl again and I definitely would love it if she becomes the Batgirl for the post-Convergence universe and just left Barbra Gordan as Oracle as Steph is just cute, fun, and an interesting character.  However, this comic does rely on you knowing these character’s histories so if you don’t know what Pre-Flashpoint DC looked like than I wouldn’t suggest this comic.

Characters Introduced in this Issue

Batgirl (Stephanie Brown): Stephanie Brown is the daughter to the villain Cluemaster and as such decided to become the superhero Spoiler to stop Cluemaster.  Since then Steph has also been Robin (for an extremely short amount of time) and is currently the current Batgirl.  If Barbra Gordan’s the BA, butt-kicking Batgirl, than Stephanie Brown would have to be the cute, fun, and lovable Batgirl who is to Tim Drake what Barbra is to Dick Grayson.

-Powers: Normal human but does have some fighting skills and is apparently wanting to become a doctor later in life. 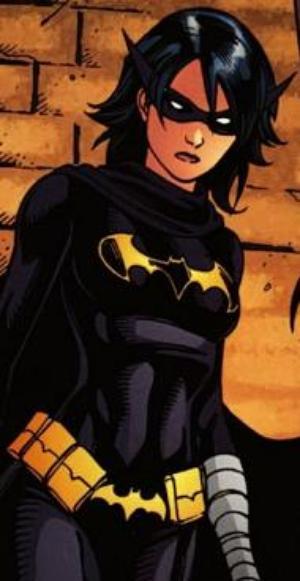 -Powers: While Cassandra is just a normal human, she is a very skilled fighter.  Batman himself actually stated that he would probably lose to her in a hand-to-hand fight.

Red Robin (Tim Drake): Tim Drake is the 3rd Robin who is known for being the detective Robin.  I made a bio on him a while ago that you can check out here.

-Powers: He’s a normal human, however he has a lot of skill in fighting and is the best detective of all the Robins.

Catman (Thomas Blake): Catman is C-list Batman villain that is considered a laughing stock amongst his villains.

Gorilla Grodd: In this universe, Grodd is the ruler of Gorilla City (yes, there is a Gorilla City).

The story starts somewhere in the dessert where we see Batgirl Black Bat, and Red Robin.  Batgirl leaves the group to find a place to go to the bathroom.  While gone, she’s jumped by Catman.  During the fight, Red Robin shows up to help but Stephanie tells him she can handle Catman herself.  During the fight, Catman mentions how he should be dealing with Gorilla Grodd instead of Stephanie Brown.  Suddenly, and seemingly randomly, Stephanie take off and heads toward where they left Black Bat and we see her fighting Gorilla Grodd.

We then cut to a flashback 1 year ago where Stephanie Brown decides to hang up her Batgirl costume after the dome went up.  While not being Batgirl, Steph helps out at a hospital.  After helping a woman give birth, she left with one of the nurses at the hospital.  On her way home, she’s jumped by a villain but basically tells him to knock it off, leaving the villain confused as she simply walks away.

Back at her apartment, Black Bat shows up and gets into her civilian outfit as Cassandra.  As Stephanie and Cassandra chats with each other, Cassandra decided she wants to cook the guinea pig in her apartment.  Stephanie than angrily tells her to put it down and says that she’ll fight her for it.  This prompts Cassandra to test this and throws a punch at her (without even looking) and Steph blocks it.  Cassandra then asks her what she did in which Steph tells her that she reacted.  Cassandra tells her that reacting isn’t fighting and they get into a little argument about it.  Just then, a news reporter tells them that the dome went down and Gotham City needs a champion to defend their city among others.  A list of champions shows up on the screen and Batgirl is one of them.

Cassandra gets into her Black Bat outfit, Stephanie gets into her Batgirl outfit, and they head onto the rooftop to train.  During the fight, Batgirl zones out thinking about the when she used to be Spoiler and how fun it was.  Black Bat snaps her out and is scared at how rusty she is.  Batgirl replies with “MY BAD” and Red Robin shows up and asks her if that’s what she’s gonna say once she loses.  They then see a bunch of people trying to leave the city now that the dome’s down but the police is trying to keep them back.  Batgirl threatens to blind them to get the to calm down, but strange bubbles heads towards them and teleports Batgirl but accidentally brings Red Robin and Black Bat with her, bringing them to the desert we saw at the beginning.

Tim Drake and Cassandra Cain with the “simple face”; also, why are Stephanie Brown’s eyes closed in this panel?

The art, is ok.  For the most part it’s fine, but for some reason characters are constantly shown to have simply faces which got kinda distracting.  Let me elaborate, a lot of times artists will draw characters with simple faces (e.g. no eye brows, nose, pupils, or lips and just a line for the mouth and a circle for eyes) when a panal does not need to be detailed or a character is in the background.  And this is usually fine, but I felt like the artist used the simple dace at times where it wasn’t necessary and it got kinda distracting.

The cover is pretty intriguing as it shows Batgirl, Red Robin, and Black Bat in front of the dome with Gorilla Grodd in the background.  Although besides that, they’re just standing their staring at the reader.

Although while I liked the comic, I wouldn’t recommend it to new readers.  If you’ve only been reading New 52 titles and never read a pre-Flashpoint title than you’ll be completely lost as it references a lot of old things quite a bit.

Also one thing I was confused about is that in the Superman title the voice just stated that the cities needs champions.  In this title and the Harley Quinn title, Harley and Batgirl were specifically chosen to be the champions of their city (even though they’re in the same city).  I’ve seen some reviews of week one of Convergence online and apparently Batgirl and Harley Quinn are the only ones who had their champions chosen specifically.  So I think there are some bugs going on behind the scenes at DC.

-Shows how the dome has been affecting their lives nicely

-Uses the “simple face” a bit too often for my taste

Characters – 5: The interactions between the characters are really good and you can tell how the dome’s been effecting everyone

Story – 4.5: Love the interactions between the characters and the story is set up quite nicely, but I feel like there is a continuity problem with who’s the champions as this (and Harley Quinn) are the only titles who had their champions specifically chosen

Art – 3.5: Overuse of the simply face can get kinda distracting at times

Comic – 4.5: If you’re a fan of Stephanie Brown and the Pre-Flashpoint universe than check out this comic.  But if your new to comics (i.e. you only know the universe of the New 52) than I would try a different comic.